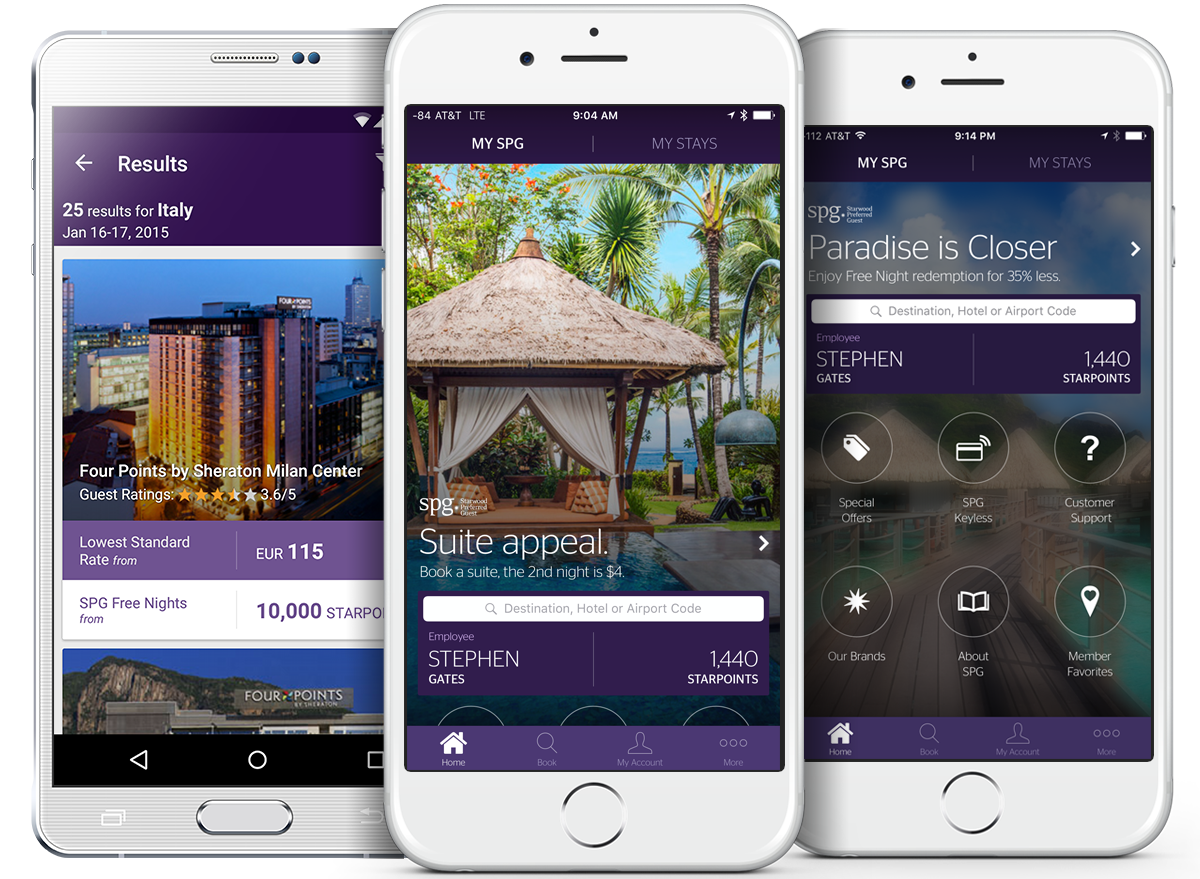 Today’s travelers are using mobile devices to search for and explore destinations and book rooms like never before.  Mobile apps allow Starwood to connect with guests like never before and give them the information they need when they need it. As a result Starwood’s mobile bookings are growing at an annual rate five times greater than the annual growth rate of the web channel 10 years ago. The SPG app is the first in the travel industry—and one of the first apps ever—to utilize state-aware technology, creating an interface that unites all nine of Starwood’s distinct lifestyle brands and its nearly 1,200 hotels and resorts; and adjusts the app’s look, feel and content depending on whether the user is planning, en route or already checked in to a specific hotel.

Starting 48-hours before a guest is scheduled to arrive at a Starwood hotel or resort, the app sends a push notification; and the “My Stay” interface becomes reflective of the specific brand and property, with home-screen access to key information such as hotel address in both English and the local language, weather, directions and hotel amenities.  Once at the hotel, the guest’s stay is enhanced with integrated content such as their room number, on- and off-property dining and activity suggestions, and in-app access to social media channels such as FourSquare and Facebook.

The Android version of the SPG app has been completely re-design to take advantage of the new Material design language from Google. This new version has a more modern, flat and clean look with the same concept that guests love with a 4.3 star out of 5 user rating from over 3,000 reviews. The SPG app for Android also won an honoree for the Travel App category in the 2014 Webby Awards.

Every day Starwood does business online in more language than the United Nations. With the SPG app we were strategic to look to see which global markets needed the robust functionality of an app and which would be best served by our movie web sites. The app is currently available in English, Spanish, Chinese and Japanese. The Chinese version differs from the rest to take into account the unique travel and usability patterns that occur with Chinese guests.

One part of an ecosystem

All Starwood mobile apps were designed with a shared visual vocabulary and navigational structure which allows for users to easily acclimate to the apps but they also take advantage of the pro’s and con’s of each form factor. Navigation across all SPG desktop and mobile experiences use navigation that uses search, account and a general menu icon. Search and account are the top two features across all SPG digital experiences and the general menu allows us to display all other functionality that is available in that experience.

Designing apps before there were apps

The first version of the SPG smartphone app was create as a basic WAP site which grew into a mobile web site which grew into an app for the original iPhone. This process of learning and evolution has continued year after year and version after version as we constantly evolve our thinking and design with the ever evolving platforms.

Covered in over 140 press outlets

The SPG app for Apple Watch has been featured by over 140 press outlets across top-tier national, tech, travel and broadcast press. Notable coverage included The New York Times (print and online), CNN, CNBC, The Wall Street Journal, TechCrunch, TODAY.com, Re/Code and Financial Times, among many others.

Featured in an Apple Keynote and in the iTunes App Store